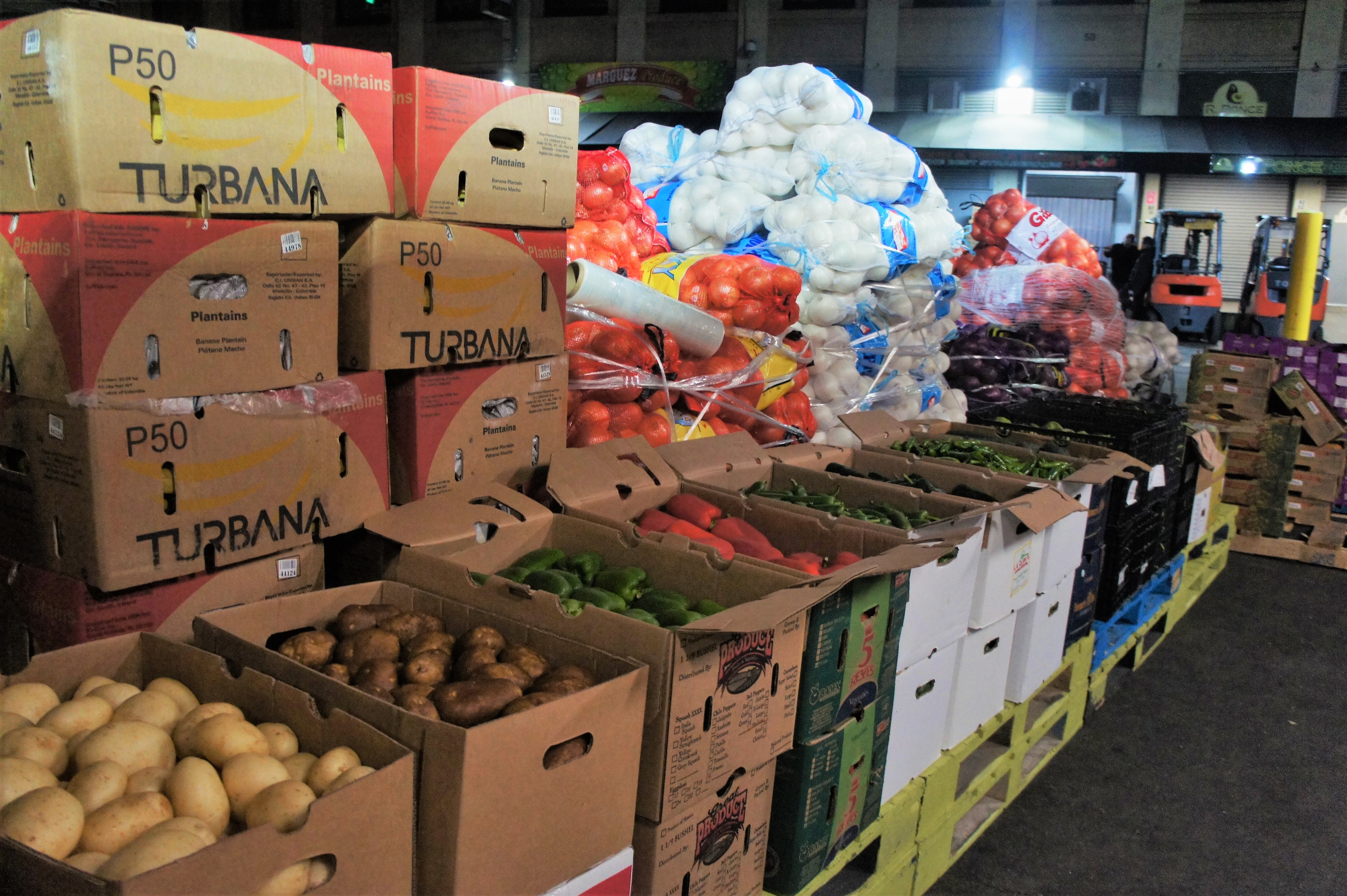 It’s half past midnight at the 7th Street Produce Market, and the hustle and bustle is invigorating, semi-trucks are revving their engines as they snake their way into the open air market.

“Every day I wake up is like Groundhog Day but it beats the hell out of working in an office,” says Danny Astorga,  ripping open a box of plantains from Columbia. He smell-checks one, decides it’s good and tosses it to his “muchacho” — one of the packagers who works for him.

Bags of white onions and red tomatoes stacked seven feet high are lined up behind boxes of a variety of potatoes and chiles; they are packed on top of a large wooden pallet that demarcate the boundaries of Astorga’s company, Pronto Produce.

“It means produce quickly,” he mumbles, translating the words from Spanish to English.

Six days a week, at the corner of Central Avenue and 7th Street, vendors like Astorga prepare their produce as early as midnight to ensure mom and pop grocery stores and local restaurants get their fruit when they need it.

On a brief tour of his display, he points to the fruit and vegetables for sale, proudly adding, “We have the widest varieties in fruits and vegetables that anybody has ever seen.”

“Our main demographic here is independent ethnic businesses, whether it’s a small restaurant or small market,” he says. To meet their needs, he carries foods that would “be rare in your regular American households.”

He explains that many of his customers are street vendors. The kind of men and women who are often fixtures on busy street corners under multi-colored umbrellas, offering sweet fruits doused in salt, lemon, and Tajin. Or the people who offer fresh produce out of tricked out trucks in what are considered Los Angeles’ food deserts.

Astorga has been in the food business nearly all of his life. It was the family business and as a teen he was begrudgingly dragged to the market by his father to work the same kind of hours he works now. Midnight to noon.

Now he owns Pronto with his sister. They are equal partners and he jokes that she’s the “brains of the operation.”

Astorga’s business is cash based and what paperwork there is to handle — shipping orders, thin yellow receipts handed to him by truck drivers, receipts — he takes care of behind a green painted desk about four feet high.

Even in the dark, the stall is a riot of vivid colors. Next to the desk is neatly stacked crates of glistening mangos twelve columns high and four rows wide. On the floor next to Astorga are small boxes of green beans and mint cucumbers. Mesh bags of brown, white and red onions create a small mountain.

After checking his morning orders, Astorga explains why he prefers working in the produce industry over working a corporate job.

“I always knew I was going to be an entrepreneur,” he says. “Since I was a kid.”

“Coming here actually opened my eyes to entrepreneurship,” he says referring to the chaotic market.

Astorga, who spends most of his twelve hour shift on his feet takes, sits for a quick break to recall his first memories of working in the industry.

“I was about 13 to 14 years old and I used to come on the weekends,” he says, rambling for a bit before shaking his head and landing on “unnatural” to describe the late-night schedule as a young student. “It wasn’t something you would like especially if you are a high school kid.

“No kid wants to do that,” he laughs.

But he is grateful for the opportunity it gave him to see that there are more careers than those his teachers told him about. Becoming a doctor, lawyer or any kind of office worker didn’t interest him. “You get taught that everything’s so traditional – you’re gonna go to an office and you’re gonna work 9 a.m. to 5 p.m. and for the majority of us, that’s not the case.”

By 2 a.m. the market is operating at full swing and the energy is magic. As workers arrive, they immediately start unloading produce from refrigerated semi-trucks. They greet each other with a quick “buenos dias” and keep it moving. The vendor on the corner next to Astorga blasts the cumbia song “Llorar” by Los Socios Del Ritmo. Mini forklifts zoom past one another, loaded with crates of strawberries, nopales, and zucchini. And still, more 18-wheeler trucks continue to arrive from both entrances of the market. The scene appears haphazard but there is an order to it, says Astorga.

It’s clear Astorga has a deep seeded love for the hundred-year-old market and all of the changes it has undergone. Where once european immigrants set up shop now mostly Latino vendors occupy the space. And the five acre complex where the market sits is returning to its former glory. Although it was once part of the second largest produce market in the world, the area is went through a deep decline in the 1970s and 1980s. But in the past few years developers have invested millions to refurbish the formerly abandoned buildings.

It is an unconventional work environment but Astorga says it operates like a large family, with all of the good and bad things that entails.

“I think the hours make it so that people can be very temperamental,” he says. “But at the same time, it’s also very family oriented. We are like a family.”