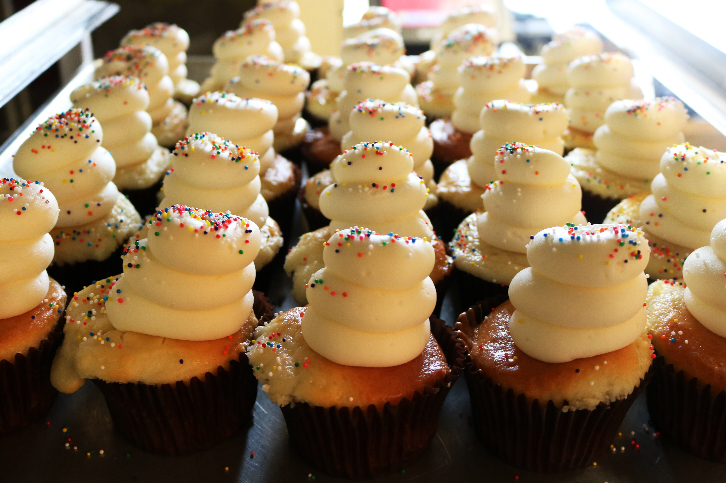 He enters Southern Girl Desserts through the back door since the mall won’t open for another few hours. In one motion he turns on all of the lights and ovens. Apron on. Hands washed. Gloves on. He’s ready to start his day.

“I like coming in at this time I’m the only one here, so I can kinda think my thoughts through and clear,” Lewis said.

This is Marquis’ place of solitude. Here he can think clearly. Without interruption, just hums of mixers and utensils clashing, the baker creates the award-winning cupcakes.

It’s been one year since he transitioned from baking bread for a non-profit organization to baking cakes.

“I started off dish-washing then baking then putting everything together, rolling out doughs everything.” A Southern Girl Desserts’ baker recommended the job to him.

“With Marquis, I tell him what the need is, and he just goes,” said Shoneji Robison, co-owner of Southern Girl Desserts. He holds all of the characteristics employers want in an employee; he takes the lead and he never complains, he just gets the job done.

Although he has no technical training, he makes sure he learns any and everything he’s taught. At seven years old he received his first lesson from his grandmother and father.

“They were basically like ‘times is gonna be different and the roles for men and women will be very different’ by the time I became an adult,” Lewis said.

He has started sharing those same ideals with his daughter Naomi, who is 7 years-old. He brings her in from time to time and gives her small tasks to do to keep her occupied.

“I bring her in and put a little hair net or hat on her and kind of just ask her to do small things to help me out. Because if I don’t, she’s going to be knocking on that door like ‘daddy what are you doing?’”

At home he uses baking cupcakes with Naomi as a learning tool. He hopes to prepare all of his children in the same manner. He plans to start a business that he can leave to his four children.

“One day I’m not going to be here and they’re gonna be here,” Lewis said. “I want to teach them how to bake so they will have a skill that will carry them.”